On Saturday 7 April came reports that chemical weapons (CW) were used in Douma, Syria. In the very early hours of Saturday 14 April the US, France and the UK launched 105 cruise and air-to-surface missiles against a CW research centre and two CW storage facilities. US President Donald J Trump tweeted “Mission Accomplished!” But what was the mission?

I am, of course, far from being the only one to ask the question. In view of the statements of success issued by the French government, British Prime Minister Theresa May and, of course, President Trump, there are probably also plenty of people for whom that nagging what’s-it-for question is a bit annoying. But it nags for a reason. Or, indeed, for a number of reasons. I’m thinking of five.

All three governments explain the missile attack as punishing the Syrian regime and deterring anybody else from also using CW. The difficulty is that, to state the obvious, a war is going on in Syria. It is complex and fought on many fronts by a bewildering number of combatant forces, some of which change sides from time to time. The US, France and the UK are all involved in that war and have been for several years. The idea that the West is not intervening in the Syrian war is pure fiction.

The issue of CW – even to punish use and deter proliferation – cannot be detached from the wider war and nor can the objectives for the missile strikes. Western news media tend to treat the attack as a one-off action but actually it is one more action in a continuing military engagement in Syria.

It may be right to seek to punish CW use and deter CW proliferation but that is not enough. First, it is not necessarily true that military action is the best way to achieve good aims. Second, how does the missile attack on three CW-related targets in Syria relate to US-French-UK objectives in the wider war? There has been no clear answer yet and it seems unlikely one will be forthcoming. Clarity only diminishes as the argument starts about whether French President Macron influenced Trump to keep US forces in Syria for longer than he initially preferred or whether US Defense Secretary General James Mattis was really the key decision-maker in Washington .

The three governments struck on the basis of their own intelligence, before the Organisation for the Prohibition of Chemical Weapons (OPCW) had carried out its fact-finding mission. There is a strong case that the intelligence reports are accurate. There is both the photographic evidence of symptoms and the record of Syrian regime CW-use. The UN Independent International Commission of Inquiry reports on 20 confirmed CW attacks by Syrian government forces between March 2013 and March 2017. But it is not clear why the US, France and the UK had to strike so quickly. There was no element of surprise to forfeit following that Trump tweet and the OPCW did not have to wait for the UN Security Council to decide it could go, so there was no risk of being blocked by a Russian veto.

After the missile strikes, there was a delay in allowing the OPCW inspectors access to relevant sites in Douma. Russia justified it on the basis of the inspection team’s safety and said it was temporary. Those who doubt the value of an OPCW evidence-gathering mission may well see that as the first step in doctoring the site to remove evidence. The US has accused Russia of exactly that and Russia has, of course, denied it.

The delay could become an ex post rationale for not waiting for OPCW evidence. Even so, it would have made better sense to let the OPCW team try to do its work first. The diplomacy would have been much more effective.

While the West’s diplomatic judgement has been questionable, so has Russia’s. Its first reaction was to say no CW had been used in Douma and the second was to say they had been used by the British. The combination of two barely credible stories is distinctly non-credible. It looks like the Russian response is merely an effort, and not a very persuasive one, to muddy the waters.

The governments also avoided consulting their respective legislative assemblies. President Macron does not need to as long the strike is a one-off; only prolonged action would require him to turn to the National Assembly for approval.

It is easy to understand why Prime Minister May might not have wanted to consult Parliament first. In 2013, after the Assad regime used CW, the House of Commons  voted to wait with military action until the evidence and the strategic objective were clear and the UN supported it. Then-PM David Cameron’s piqued reaction transformed that into an outright rejection of it. His misinterpretation has coloured media coverage of it ever since but the record shows quite clearly what the key arguments were. If May had gone to the House of Commons with national intelligence rather than OPCW evidence and with an unclear strategic objective, she probably feared a repeat defeat. Ironically, after the event, the government won the Parliamentary vote (though the procedural contortions make it hard to understand).

President Trump would likely not have faced defeat if he had turned to Congress for approval. It is, further, what he demanded of his predecessor: 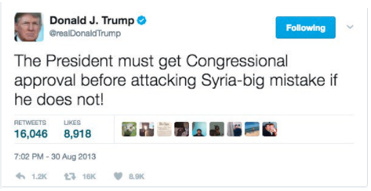 Since speed was not required (see above), it is not unreasonable to speculate whether Trump has realised that if he asks for Congressional approval in one case, he will set a precedent so he has to ask for it when another instance arises. This is not a pleasant train of thought to follow and there is no evidence to show the President is currently contemplating striking elsewhere as well. But he has recently appointed as his National Security Advisor an advocate at different times of bombing both Iran and North Korea.

The international political optics of all this are not good. Diplomacy matters. Western good intentions and good faith are not taken for granted by everybody, not even in the West. The agreed instrument for prohibiting CW and for investigating violations of the CW Treaty of 1993 is the OPCW. It is not clever to treat it as something to be picked up or set aside at will. It indirectly weakens the fabric of CW prohibition.

We do not yet know the effects of the missile strikes. Given the warning of what was to come, we can assume the Syrian government moved what it could from probable targets. The effects are likely to fall somewhere between the Pentagon’s claim that the strikes ‘had taken out the “heart” of President Bashar al-Assad’s chemical weapons program’, and UK Labour Leader Jeremy Corbyn’s assertion that they achieved only ‘a demolition of what appear to be empty buildings’.

The effect of the strikes on Syria’s CW capability can only be gauged on the basis of knowledge I do not have. The effect on the Assad regime’s willingness to use these abominable weapons will only become clear, if at all, over time.

The broader consequences for the war seem likely to be marginal. One night’s missile strikes at three targets will neither shorten nor lengthen the war. Nor do the strikes reflect a change in US strategy. In announcing the strikes, President Trump emphasised that other US military action in Syria is focussed on eliminating ISIS and repeated his wish to withdraw US forces “as other nations step up”. Talks are going on (again) to encourage Arab states to put up the replacement forces.

Nor does it seem very likely that the strikes will have much effect in international politics. Tensions between the West and Russia have risen because of it; they were rising anyway and Russia hasn’t yet taken any counter-actions. In a longer view, the strikes will be one more moment among many in a deteriorating relationship.

Is there really no alternative to one-off missile strikes as a response to CW delinquency?

Many politicians and much of the western news media treat this is an issue of a criminal state breaking international law by using CW. But they don’t follow that logic  through. Instead of just focusing on action, build international institutions and respect for law. And instead of thinking about just one kind of punishment, think about several. As in criminal domestic law, when deterrence fails, punishment doesn’t have to be capital.

The problem is that for lesser sanctions – financial and economic, for example, targeted on the regime’s elite – to bite, other states have to buy in. They will do so if they believe in the law or, for prestige reasons, must pretend they believe in it. That works only when all see that the system of law works in their favour, that there is genuine equality within it, and that the powerful neither try nor get away with cherry-picking the bits of law they like and ignoring what they don’t.

If those who would uphold the law (for example, DO NOT OWN OR USE CW), disrespect another part of the law (for example, RESPECT SOVEREIGNTY), and ignore parts directly applicable to the case in hand (for example, REFER TO THE OPCW FOR INVESTIGATING USE OF CW), they weaken the law. I will not go so far as to say that responding to CW use with an unsanctioned  use of military force makes future use of CW more likely but I do argue that lawful ends are best fulfilled through lawful means.

Once again the US, France and the UK missed an opportunity to strengthen the web of international treaties and institutions aimed at prohibiting CW possession and use. How do they expect others to respect international law if they do not? It seems most unlikely that what the three governments have done, or would ever be willing to do, will end the story of CW. Instead of taking the law into their own hands, ineffectively, time after time, they should focus on a steady commitment on building international institutions.

In time, that could be far more effective than a hundred missiles.