Peace is the big, under-reported good news story of the 20-plus years since the Cold War ended. There are fewer wars than in the 1980s. There have been more peace agreements, and an increasing proportion of them endure for longer.

Good. Because the next 20 years will make the last 20 seem like a rehearsal for the real thing.

And the coming challenges make a strong case for keeping a clear focus on peacebuilding in the coming period. International discussions continue about the likely trajectory of development and the shape of development aid policies after 2015. At International Alert, the organisation I am privileged to lead, we are looking at what the issues of insecurity and violence are likely to be, how best to meet them, and where to find opportunities for peace and progress.

This article is the first of three in which I will explore some of these questions, starting here with the good news, balanced by raising a sceptical eyebrow or two. In the next article, I will look at long-range pressures that are building and that look likely to form the background to conflict risk in the next 15-20 years.

Data gathered and organised by the Uppsala University Department of Peace and Conflict Research, and presented among other places in my State of the World Atlas, reflect the decline in the number of wars.* This is a map showing which countries were experiencing armed conflicts in 2012 (red) and which other countries had experienced armed conflicts at any time from 2000 to 2011 (pink). 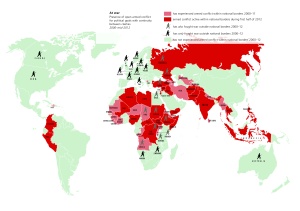 Published 10 or 20 years ago, it would have had far more countries in both colours. The headline number is approximately 30 armed conflicts in 2010 compared to 50 in 1990. And as the Human Security Report found, wars are on average less lethal now than in the 20th century.

This improvement in the state of the world has not come about by accident. Christine Bell’s authoritative study On the Law of Peace found 646 peace agreements reached from 1990 until the end of 2007. There have also been more peacekeeping operations.

Along with this, there has been significant and sometimes massive international spending on trying to build firm foundations for peace in war-torn countries.

The problem about this positive picture is not just that while 30 wars are better than 50 they are still far, far too many. There are sound reasons for raising a sceptical eyebrow about the good news before going looking ahead to some mounting conflict pressures.

1. The growth of peace has slowed. The number of armed conflicts each year fell steadily from the mid-1990s for a bit over a decade. Then that decline bottomed out and has now stopped. Whereas there were 30 wars in 2010, Uppsala recorded 37 in 2011, with the number falling back to 32 in 2012, the last year for which figures are as yet available.

So it’s too soon to talk about a new negative trend but the old positive one seems spent out.

New wars have started – as in the Middle East – and the ones that persist are proving extremely difficult to bring to a close. War can become a habit, a mode of social organisation, the norm, a source of profit and power for those who can control it, and therefore a paradoxical part of a country or a region’s equilibrium.

2. Ending the fighting is not the same as building peace though it’s a necessary start. In many cases peace agreements and the accompanying international apparatus have suppressed the violence but not addressed the main causes of conflict. Accordingly, the risk of a re-eruption is still there. Without a peace agreement the chance for building peace probably doesn’t exist but the mere fact of reaching an agreement does not guarantee further progress. One of the best indicators of where there is risk of future violent conflict is simply to identify where there was recently violent conflict.

3. Building peace needs sustained international support, which is proving harder to come by these days. The decline in the number of UN peacekeeping missions reflected in the graphic above is partly because some missions have successfully ended. But it is also symptomatic of a reluctance to spend out on new ones.

The UN’s annual peacekeeping expenditure is around $9-10 billion, tiny compared to global military spending at $1.5 trillion, and not large when put alongside international development aid at around $120 billion. But austerity in public spending makes spending decisions at the margin much more sensitive than before. Many governments sense (and several both express and feed) public resentment at spending on issues ‘over there’ while hospital wards close down and rivers break their banks at home.

4. Other kinds of violent conflict also undermine security. As the World Bank’s World Development Report 2011 emphasised, the violent conflicts that are addressed by formal peace agreements and UN peacekeeping operations are only part of the conflict picture. 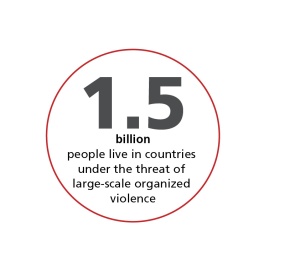 The annual figures from Uppsala also cover armed conflicts that look just like ordinary civil wars except that the government isn’t a combatant. 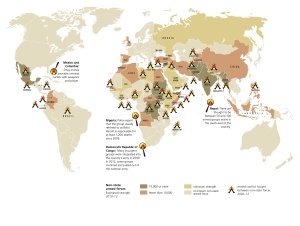 But the problem goes even wider than this into territory Uppsala does not chart. On the spectrum of violent conflict, these conflicts shade into other kinds, especially large scale criminality, whether in the form of gangs’ control of deprived urban areas, or the heavily profitable trafficking in illegal narcotics, other contraband and people. These conflicts also kill large numbers of people, as Mexico’s experience in the last decade shows, and destabilise societies. So the picture of growing peace presented by a focus in ‘regular’ armed conflicts, though real, is not complete.

Even so, the overall picture is relatively positive. The achievements are real. A great deal has been learned and for all the failures, mis-steps and catastrophically misguided political agendas, the world is in a better place now than it could well have been.

There are, however, pressures building up that make lessons learned over the last 20 years particularly valuable. I will explore them in the second article in this 3-part series.

* All graphics come from my State of the World Atlas (Oxford, New Internationalist & New York, Penguin, 2013).